What is this about?

To better understand content, marketing and positioning in the Ethereum scaling space, we decided to answer three questions about our peers in the industry:

The analysis started with Twitter posts but went far beyond, as the projects are constantly tweeting links to other content platforms (Medium, YouTube, blog, etc.) We examined about 100 posts of each project around their Mainnet pre-launch or launch stage.

What peers are posting

The most popular topic around which our peers create content is tech development. This is basically the only topic that is extensively covered by all five projects. Unsurprisingly, everyone loves to share their tech achievements in this open source environment. Below is a chart of the topics covered. 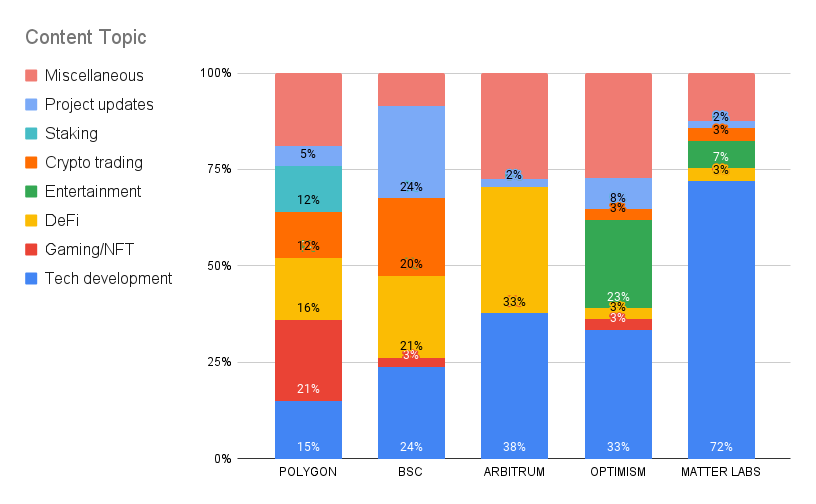 Everyone creates a lot of content around engineering and development. Matter Labs are really excited about zero-knowledge proof methods and like to share their thoughts about it. It is worth mentioning that in the past month BSC increased the amount of gaming/NFT content to nearly one quarter of total content, which is not reflected in this chart. Optimism and Matter Labs virtually don’t post about DeFi.

Are we all that nerdy about technologies? Yes, actually, which is cool. This is the developers’ sphere, after all. However, Optimism stand out in terms of the entertaining content. They like to share memes, funny photos of their team working in the office, or even don’t mind doing a freestyle rap about Plasma chains.

Then we explored the type of content the five projects were creating. We expected that blog posts would dominate in terms of effort. The chart below shows the types of media platforms the projects were using the most. 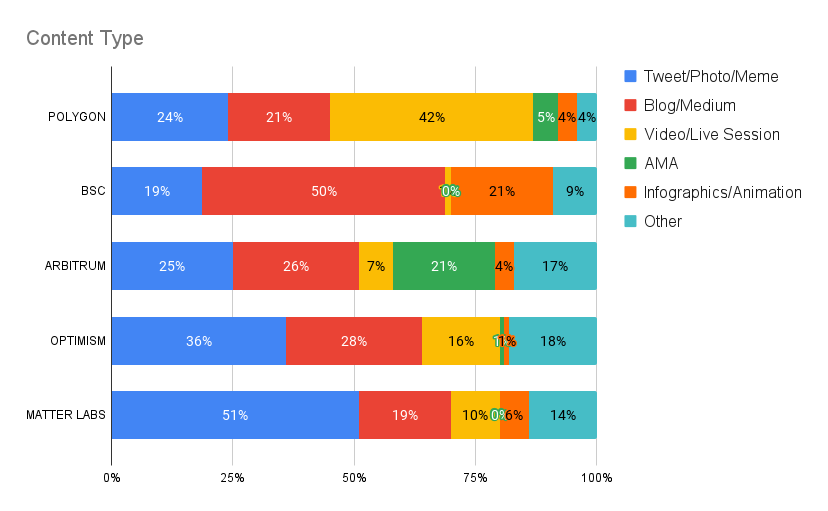 As expected, blog and Medium posts take a substantial amount of content space for each project. Interestingly, Polygon is rather active creating videos and live sessions. About one third of those live sessions were related to the Gaming and NFT topics, and another third covered DeFi.

Arbitrum did the most AMAs as a percentage of their total posts, answering the questions about technology, DeFi, as well as covering general topics.

Who are the target audiences?

We identified five broad categories of audiences each project was targeting. 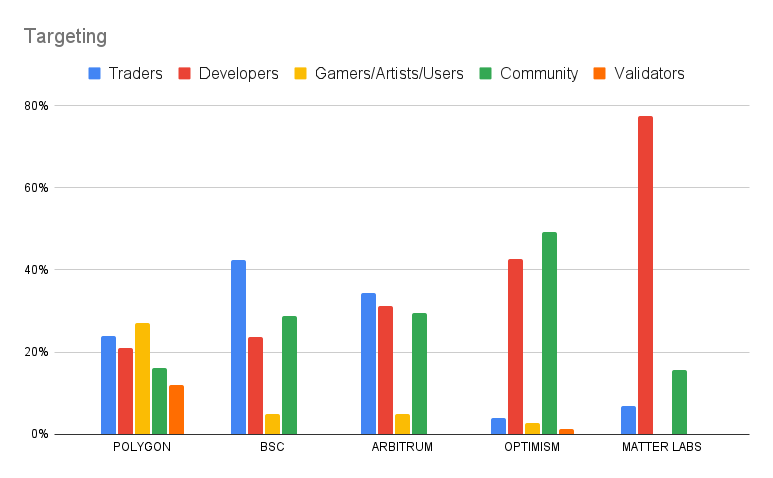 As we can see in the chart, the focus of Matter Labs on developers really stands out. Again, they are excited about the ZK-SNARKs and ZKP-secured rollups, and we appreciate their effort to share the excitement with all of us.

Polygon seems to be the most diversified in terms of their target audience. Also, it was the only project which cared about gamers and artists around their mainnet launch. Meanwhile, Optimism paid the most attention to the community. As mentioned earlier, they like entertaining content, which is obviously community-driven rather than addressing any specific audience.

What is the fundamental message?

We tried to identify the underlying message of every post or tweet each project delivered, which is not a trivial task. The qualitative analysis revealed that there was one single message that absolutely every blockchain peer was trying to communicate.

Well, this message can be attributed to any new project announcement and project update, so it naturally evolves in this fast developing industry. Other common messages included:

It would be more interesting to identify a unique message each team was conveying, wouldn’t it? Well, luckily each project has its distinguishing features and approach to creating content.

Here’s what we found:

Polygon mentioned the term mass adoption multiple times in the context of their contribution to it. Great aspiration, we fully support that idea!

Binance Smart Chain created a fair amount of content about safety and security, anti-fraud, flash loan attacks, etc. Besides that, BSC likes to ask open-ended questions to the community in their Twitter, showing that they are interested in community opinion.

We care about your questions.

Arbitrum’s focus on AMAs showed how much they care about educating the community and answering questions. It's nice to be aware of what your followers want to know!

We are open to community.

Optimism’s random photos and short videos of their work process and office discussions really tells everybody how open they are to the community.

Not in a haughty, but rather in an educative way, Matter Labs shared their achievements in winning multiple prizes at hackathons, their progress with polynomial commitment schemes, and explained how they evaluated L2 scaling solutions, emphasizing why zkRollups were the best of them.

It was fun and extremely interesting to dive into our peers’ marketing tactics and content strategy.

We would have also liked to have analyzed engagement (likes + retweets) for different audiences and topics to see what worked best for everyone. However, while likes and retweets are easily accessible, without access to the number of followers at each particular time, results would have been distorted, because every post that is published at a later stage naturally gets more engagement, as the nubmer of followers increases.

Obviously, many of the topics which the projects covered were dictated by the partnerships they were entering at that time. Our colleagues followed slightly different strategies, whilst there also were noticeable similarities in their approaches. Everyone likes to build and cares about developers. Everyone loves the blockchain community. Every project chooses topics, messaging and communication channels that most fit their particular ecosystem.

At the end of the day, there were some interesting insights discovered that we hope will help everyone to grow even faster, as well as help to inform our own emerging strategies as we begin our journey here at Aurora!

We are glad to be in the industry with such great projects and strive to contribute to Web3 growth along with them. Thanks to: