The AURORA_2211 token is a liquid, transferable ERC20 token (Etherscan) that can be redeemed one-to-one for AURORA tokens at this website on November 18, 2022. Its purpose is two-fold — allowing the broader community to access AURORA that is planned to be unlocked in November, and to ease selling pressure associated with that planned unlock.

The token component of the compensation has a one year cliff, meaning that the staff does not own any of the first year’s tokens, until they pass their one-year anniversary. Besides the cliff, for those who joined Aurora Labs early, there is a delay of delivery of the vested tokens until November 18, 2022 — exactly 1-year after TGE (the token generation event). This mechanism was introduced to protect the community from excessive unlocks from the early contributors.

Many Aurora Labs staff have passed or will pass their one-year cliff before November 18. This means that they legally own 25% of their overall token compensation. However, these tokens are locked (unable to be delivered) until November 18, 2022.

There are staff who naturally would like to receive some amount of liquidity now for the AURORA tokens they currently own, but can't receive until November. This is primarily related to tax liabilities, i.e. many governments require tax residents to pay income taxes on the fair market price at the moment of token vesting. Since the vested, but locked, tokens cannot be transferred (and thus sold to pay the taxes), early contributors are exposed to substantial market price risk, since by November 18, 2022 the price of AURORA could theoretically drop such that capturing the tax liability isn’t possible.

The above problem is typically solved through private agreements between staff members and third parties to buy the rights to the tokens that will be delivered at the unlocking date. Though this approach works well, it can be improved to take advantage of the decentralization and permissionless principles of the blockchain.

An additional concern is the risk to the token market, given the size of early contributor unlocks. Aurora Labs recently performed a step to protect the Aurora community from this problem by delaying the unlocking schedule for the staff (see this recently published blog article).

We care a lot about the community, and would like to decrease this risk even further.

The solution that we’ve designed is called the Aurora Futures token, known as AURORA_2211.

There, you'll find the current circulating supply of AURORA_2211, the smart contract address, as well as a redemption area that will become active on November 18, 2022 at 00:00 UTC. 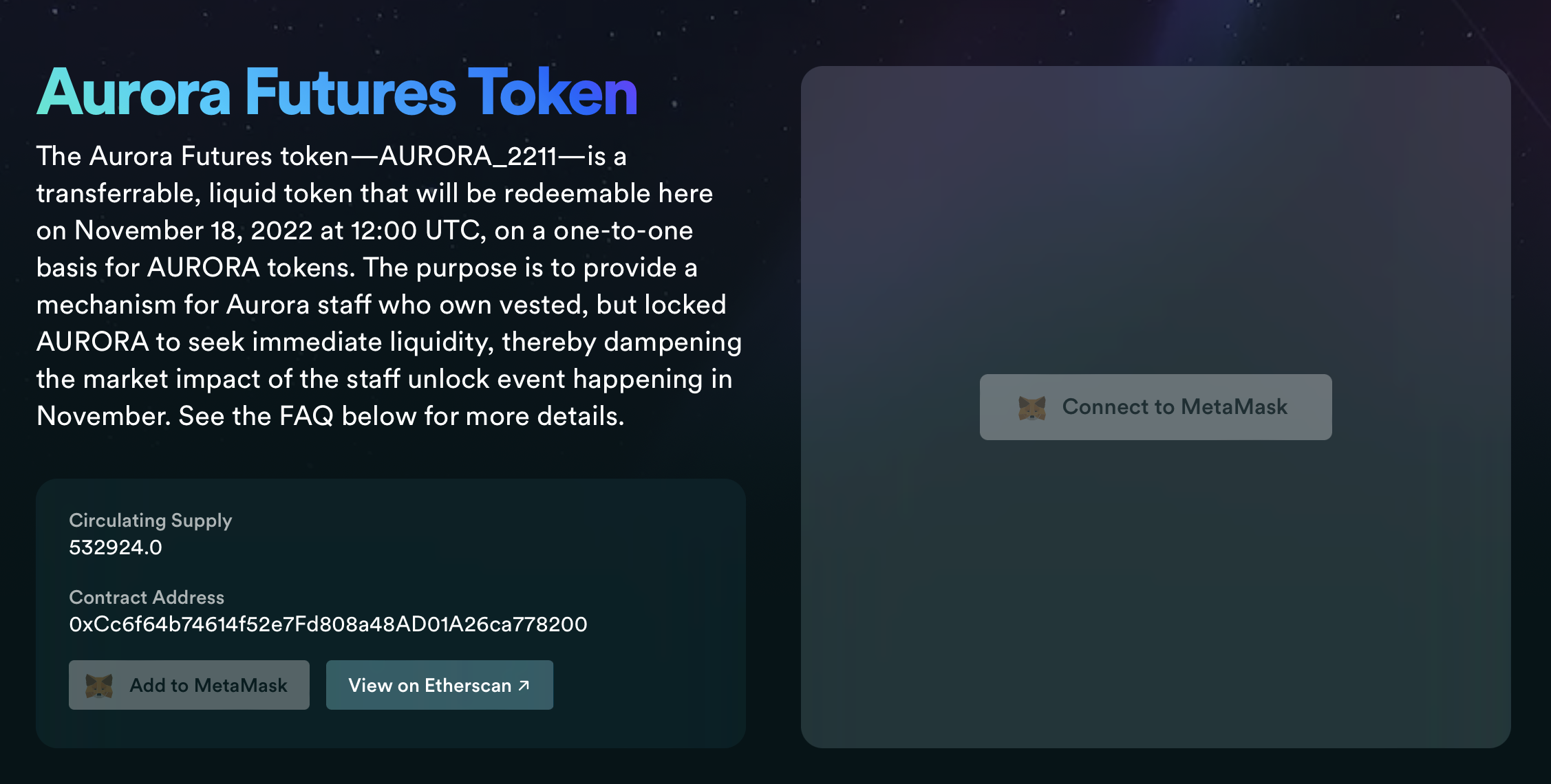 Here are the benefits:

Feel free to poke around the Aurora Futures site, read the detailed FAQs about how it works, and if you’d be interested in getting in touch with staff who have elected to have these tokens minted, just reach out to support via the icon in the lower right corner.